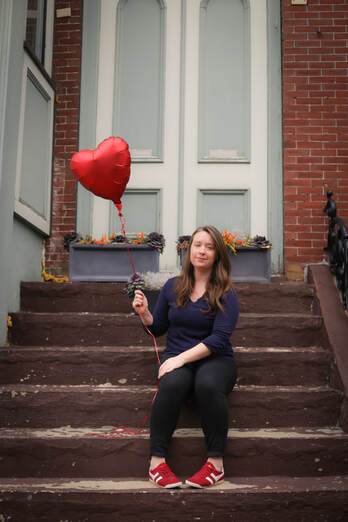 Audrey always wanted to be Clara in the Nutcracker. It never happened. Instead, she attended Connecticut College and is now a Boston-based dance/performance artist, among other things. Audrey has a grandmother who is in the Maine Basketball Hall of Fame, a sister who holds D1 Track & Field records, and a partner who studies lions in Africa. Audrey has found greatness of her own: she once choreographed a dance with 176 oranges in it.
Audrey MacLean is a Boston-based dance/performance artist. Since graduating from Connecticut College, Audrey has had the pleasure of performing throughout New York and New England in work by Jimena Bermejo, Peter DiMuro, griffindance, Heidi Henderson, Grant Jacoby, Annie Kloppenberg, Betsy Miller, Ruckus Dance, and shovegentlydance. Audrey's own work has been presented through Green Street Studio's New Works program, The Dance Complex's aMaSSiT program, as part of DanceNOW Boston at ART's Oberon, and was featured on CPTV's Spotlight on the Arts. In the spring of 2016 she co-produced and curated an evening of short dance/performance work titled "Dance Shorts" which brought together eight Boston-area choreographers. Aside from her own choreographic pursuits, Audrey has served in administrative roles for The Dance Complex, Green Street Studios, and Moving Target Boston.  Audrey has also been a guest teacher in both technique and composition classes at: The College of the Holy Cross, Berklee College of Music, Moving Target Portland, Moving Target Boston, Rising Tide Charter School, and Wilmington Dance Academy.
photo: Olivia Moon Photography/@halfasianlens